The YMC has been responsible for the publication of the definitive guidebooks for Yorkshire Gritstone and Yorkshire Limestone for over 40 years. Each publication is co-ordinated by a Steering Committee which is supported by a dedicated team of volunteers who all generously give many hours of unpaid work. The YMC and indeed the climbing community are greatly indebted to all those involved in the process.

In turn the YMC is committed to continue the publication of these definitive guidebooks.A percentage of the income from the sales of guidebooks is donated to the BMC Access and Conservation Trust which supports many projects both nationally and locally. 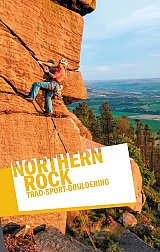 The bumper selection of over 3500 climbs and problems with detailed, accurate maps and full photo-diagram coverage has been carefully curated by dedicated local experts from each area. A guidebook that will provide any climber with a massive resource of quality days out and inspiration for many more on top of that! This guide features over 50 crags. With descriptions for over 2,000 routes from Moderate to E8 and a similar number of boulder problems from Font 1 to 8b+, it will keep most keen climbers occupied for the foreseeable future, at least until the second book in the series is published.

Climbing areas covered by Volume 1 are: An inspirational and definitive rock climbing guidebook to the routes and bouldering of the south-western sector of Yorkshire Gritstone. Produced by the Yorkshire Mountaineering Club and compiled by a vast team of committed, volunteer climbers who know the area like the back of their hand.This guidebook builds on the well-received attributes of the first volume (which covered the north-eastern sector of Yorkshire Gritstone). It features: over 75 Yorkshire Gritstone crags like you've never seen them before, with areas never previously fully documented; over 2100 routes from Moderate to E9; 2900 boulder problems from Font 1 to Font 8b; over 180 full-colour action photographs; hundreds of full-colour topos; over 30 illustrated access maps and stunning aerial photographs; 6 bouldering circuits featuring classics, unsung gems and unusual challenges; exclusive profiles of the climbers who shaped the Yorkshire Grit scene, from Ron Fawcett and Jerry Peel to John Dunne and Jordan Buys; full first ascent details, climbing history and graded lists.

The world-renowned Yorkshire Gritstone crags are presented in all their glory in this volume but the local experts that have shaped this guidebook have ensured the treasures of the more obscure venues are delightfully revealed for the benefit of all. Volume 2: Ilkley to Widdop, is the essential companion for those looking to climb gritstone in this part of Yorkshire; from those who love to climb and boulder in the county through to those making their first forays into the vertical world and/or venturing to this beautiful climbing area for the first time.

This guide was published in 2005 and features over 60 crags. With descriptions for over 3000 routes covering Trad Grades up to E8 and Sports Grades upto F9a+. The guide provides a wealth of climbing in superb surroundings.There are many colour action shots, crag access maps and colour diagrams.

The crags covered include the big three; Malham, Gordale and Kilnsey, together with many important crags such as Attermire, Blue Scar, Crummackdale, Giggleswick, Pot Scar, Trow Gill and Twistleton and a host of other smaller but still attractive crags.